And we're off (to the islands)

As I've been working away on wee graphics projects since I graduated from university in 2011 I think it's high time I published a portfolio online.

As I'm based in Scotland I thought it would be a good idea to kick things off with this wee design. It's the country's 100 largest islands in order of size; from the 'big four' of Lewis/Harris, Skye, Shetland Mainland and Mull to Gairsay in the Orkney archipelago. I was slightly surprised by quite how small the islands become after the first 30 or so - especially as there are many hundreds of even smaller islands, islets and skerries scattered throughout the Hebrides, Shetlands and Orkneys. Small or not, Scotland's islands - inhabited and uninhabited - play an important role, alongside the mainland Highlands, in the identity of the country at home and abroad. To my mind, these Islands (particularly the Western Isles) represent the very best of British landscapes and this graphic is really just a celebration of the many inlets, peninsulas and beaches whose shapes on the map can so easily be imagined in three dimensions. 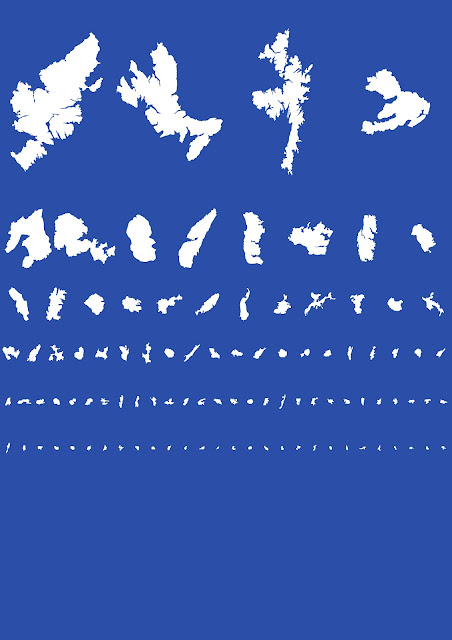 Islands are so much a part of the geography of Scotland that a silhouette of the country without them can look really bizarre; take away the islands and the west coast looks sort of naked. This thought inspired this sister project. Aside from the two big islands of Great Britain and Ireland, the Scottish groups, Anglesey, the Isle of Man and the Isle of White, there are a great many other lesser known islands which make up the British Isles. The general shape of Ireland can be identified through the proliferation of smaller islands which hug its fragmented coastline. Concurrently, small islands off the southwest of Wales, those in the the Thames Estuary and the Scilly Isles help pick out the general shape and extent of Great Britain. The result is a 'map' which looks surprisingly identifiable. Indeed, if it wasn't for the relative paucity of islands off the east coasts of England and Scotland, it might look almost as natural as a map of the archipelago which excluded all but the two big islands.

These are the 'other islands' of the archipelago. 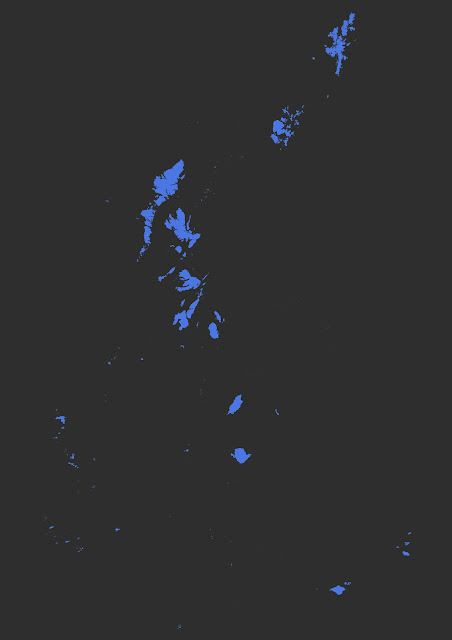